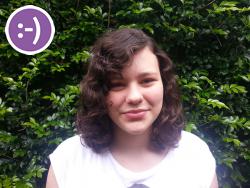 Hi, I’m Jessica Bogoyevitch, I’m 13 years old and I’m the 3rd generation of Hereditary Angioedema sufferers in my family.  Even though I’ve only been alive for 13 years I have had my fair share of HAE attacks. Over the years I have learnt that because you have swelling it isn’t the end of the world, it just means achieving your goal is really, really special.

I only tell the kids I really trust when I have swelling, the ones that already know about the HAE, because I’m scared that I will get teased again.  It’s happened before; they don’t believe it’s that bad or they say; you can still move it, you can still use it, just get over it. I had a kid tease me about using crutches when my foot was swollen because he thought I could still use it – he only stopped when I exclaimed “Have you seen the size of my calf!?”

Just recently I was in hospital for three days with a swollen throat. I had to have an injection to get me out of danger but it was still swollen enough that I could feel it. So Mum and I stayed in hospital just in case it suddenly went up again.  I was worried about missing so much school, so when I was discharged I wanted to go straight to school.  My close friends were amazed because they didn’t realise the full extent of my swelling.  I’m still scared to this very day to go to school with obvious swelling, but the only way for me to get over that phobia is to do the opposite of what my mind is telling me too. Then three days later, when I felt refreshed and brand new, I embarked on my first full hike, with scouts. Which turned out to be amazing and I did it carrying a 30kg pack. So I’ve learnt that if I let HAE rule my life I would never go anywhere fun or do anything amazing.

I was surprised to hear about the HAE support group and Australasia Conference, but interested to see what was on offer. I took home a lot of knowledge and tools to make my life as a HAE sufferer easier.  Hearing the stories from others, I learnt that I am as lucky as you could get to have had a great medical support team, and access to C1-esterase Inhibitor injection from a young age.  It is scary for me sometimes but for others, not knowing what was wrong with them and having countless surgeries that achieved nothing in helping them must have been terrible.  Some countries still don’t have access to the medications that we do in Australia.

I also learnt facts about HAE I never knew, like you don’t need a family history of HAE to get a spontaneous mutation, and that 1 in 50,000 people have HAE.  I also heard that there was going to be a site launched on the 16th of May for HAE day which would contain all sorts of stuff; like a map to show if their where HAE suffers near you (which is excellent considering that I never met anyone apart from my four other family members who suffer HAE); and information about treatment; and other peoples stories.

Thanks to HAE Australasia I have learnt more in a day than I could in a lifetime.