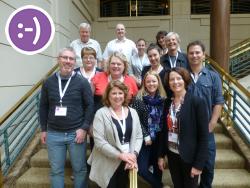 Setting New Standards was the focus of the 2014 HAEi Global Conference in Washington D.C. HAEi represents 37 countries worldwide and 26 countries were present at the meeting. The primary mission of HAEi is to provide information and technical assistance that enables a timely diagnosis and optimal treatment, as well as research in HAE. Of the global community of 1000, ten Australians and four New Zealanders were part of the event. The conference began on Friday morning with a scientific session attended by HAE physicians and researchers. We heard from physicians about the advances in knowledge and new treatments of HAE. We also heard of new research trying to unravel many of the things we still do not understand of HAE. During the Friday morning there was also a patient session with a “HAE Disease Primer for Patients and Care Givers”.

The HAEI General Assembly Session was very exciting with the election of our President Fiona Wardman to the International Executive Committee of HAEi. The conference general sessions after lunch on Friday included the official opening and key note presentations by HAEi President, Anthony J. Castaldo, titled “Because it’s Personal”.

The proceedings on Saturday focused on the importance of patient advocacy and commenced with reports on the status of HAE diagnosis and treatment from the national organizations in Argentina (and Latin America), Australasia, Germany, Japan, Macedonia, Poland, and United Kingdom.

A group of young German patients spoke of their “Young person’s meeting in Berlin” and are suggesting a “HAE International Exchange Program” be investigated. After a much delayed arrival into Washington Ms Makiko Matsuyama of Japan gave a most moving address of her motivation to be involved, her young undiagnosed husband’s unexpected death from a laryngeal HAE attack. And the subsequent diagnosis of her Daughter, Mother-in-law and Sister-in-law. The Saturday session included motivating talks from patient advocates: Frank J. Sasinowski from the National Organization for Rare Diseases with the title “The Rising Power of the Voice of the Patient in Developing Medicine,” and Melissa Hogan from SavingCase spoke of her journey in caring for her child who suffers from a rare disease called Hunter’s Syndrome, “An Advocate by Necessity: A Mother’s Story.” Welcome to Holland” was a beautiful warm description of the frustrations and joys of finding yourself “In Holland” with her child Case with a disability as opposed to “In France” the expectations of a completely healthy child. Dr. Marc Riedl then provided a physcian/researcher’s perspective on “The Importance of Patient Advocacy.” He spoke of the partnership between physician and patient, he would like to suggest patients research their treatments but don’t arrive at an appointment with a library of internet printouts!

Saturday was completed with a Q&A session and then closed by Mr Anthony Castaldo the President of HAEi, suggesting after the sharing of all these ideas we head home prepared and motivated to try and make improvements in our own countries.