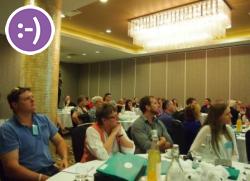 The sun was shining as we gathered at Rydges in Brisbane for our second Patient Meeting. The warmth outdoors was matched with warm greetings of hello again or great to meet you. Many people meeting someone else with HAE for the first time and others glad to catch up again with fellow HAE families met in 2012.

Fiona Wardman, President of HAE Australasia spoke of the progress of the group over the two years. The greatest achievements being the listing of Icatibant for reimbursement and the inclusion of New Zealand patients in our group.

Professor Connie Katelaris, the HAE Australasia medical advisor spoke to the group again. She delivered an overview of Hereditary Angioedema, the cause, the symptoms and the treatment. She informed us of the usage and experiences of Icatibant since its listing on the Pharmaceutical Benefits Scheme of Australia in August 2012. The statistics of which supported the notion that the Injection was being used according to guide